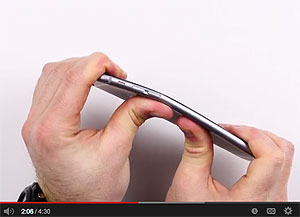 Uh oh… what’s this… seems there’s incontrovertible proof that the newest Apple iPhone 6 Plus can “… Bend It Like Beckham” (WSJ article 9/24/14)!  The article by Daisuke Wakabayashi cites videos of users who have reportedly bent their large-screened iPhone with their hands.  But was this something Apple intended?  Don’t recall a bullet point with that particular design feature mentioned, do you?  With so much buzz about this new device, of course someone had to try it!

The video commentator notes that there’s a weakness in the aluminum structure around the side buttons that could be vulnerable to the kind of bends that potentially happen when, for instance, you put your iPhone in the front or back pockets of your jeans.

The video clearly shows that under some duress–hands only mind you–the iPhone does bend significantly near the button cutouts.  It’s a nice BIG phone so there’s a fair bit of malleable aluminum. “It won’t be the most durable from that standpoint but look at that footprint… !”

SO, looks like you’ll want to keep an eye on that.  It’ll be interesting to see how Apple responds to this in upcoming weeks.